I Want To Give My Time To God Too 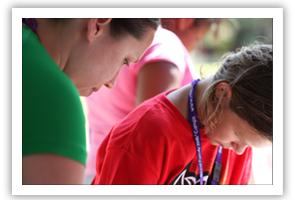 Jesus Christ is uniquely qualified to be our intercessor. He understands what it’s like to walk in our shoes.

In the same way, we had two teen helpers who lived as campers themselves. Kendall and April were the only ones who had the experience of walking in our royal kids’ shoes. Their memories and influence were invaluable as they dealt with our children as no one else could.

Vivi, one of our young girls, saw Kendall toiling at the tie-dye table. She couldn’t believe Kendall used to be a camper too. She asked her counselor, Whitney, “You mean she’s like us?”

“Yeah, she was here at camp when she was little, and now she wants to give her time to God,” Whitney explained.

“I want to give my time to God too – just like her!” Vivi decided.

Another little one was influenced by April. It was the first day of camp and this child refused to join in the game activity. April saw the problem and advised the reluctant camper, “You know, when I was a little camper, I didn’t want to play at first either. But then I realized I’d get pictures at the end of the week that I could look at all year. I wanted a photo of the games, so I tried it. I was sure glad I did!”

Like magic (April’s magic), away ran the young convert, eager to give it a try. Later, she thanked April for helping her get involved – she had so much fun!

Thanks, April and Kendall, for giving back to God.