Camp is so great! It is very hard to capture the spirit of camp to pass on to others. The volunteers for the June camp were blessed by 123 of God’s precious children. Here are moments we captured.

Monday night, Counselor Dusty told his 9 year old campers about his daily habit of reading from a devotional app and the Bible that he had on his phone. Right before they went sleep, he read to them from the Bible. Tuesday after lunch, Dusty was looking very forward to resting during 30/30 time. But following the example from the night before, Colton and Marc wanted to read. In fact they wanted to read to Dusty. Dusty agreed, and the boys started whispering and turning pages in their Bibles. When they found it, they started reading the story of Jesus’ birth to their counselor, alternating back and forth every verse. 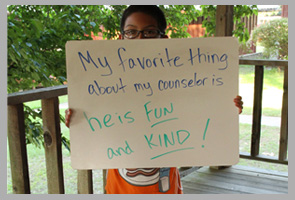 For the birthday party dinner, all chairs are decorated with helium balloons tied to the chair backs. 6 year old LaQuanda asked Mr. Kevin to take her outside so she could let her balloon go. Mr. Kevin gently explained to her that if she lets her balloon go, it will just blow away and she won’t have it any more. But LaQuanda replied, “I want Jesus to have a balloon at the birthday party.”

Pat has been working at RFKC for at least 10 years. Over the years, he has accumulated all kinds of supplies in his camp bucket including a roll of butcher paper. Year after year, he hasn’t needed it, but for some reason, he just kept it in there. Tuesday afternoon‘s downpour left several groups stranded at the dining hall. Pat pulled out that butcher paper and some markers and made an instant activity center for the stranded boys.