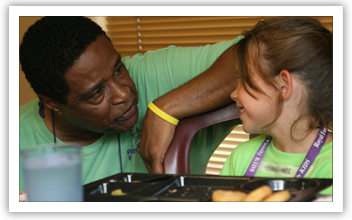 I wish everyone could come to camp and experience God working through the volunteers, watching them make a difference in the lives of children of abuse and neglect. How lucky we are! Scripture comes to life and causes many to dream of what Christ intended life to be like for a community of believers.

The June camp brought us several glimpses of change in the hearts of the children. Here are a couple of those stories.

Marcus was a 10 year old with an emotional age of around 6. This was his third year at camp and he was having a tough time. On the first day, he was pushing every boundary. He was talking back and doing the opposite of what he was told. It was basically a test of his counselor. In a world where your home changes without notice, people who should love you hurt you, and you can rarely trust what anyone tells you, it is easier to just push people away. You learn to trust those who don’t react when you exhibit this kind of behavior and those who don’t react, are few and far between. 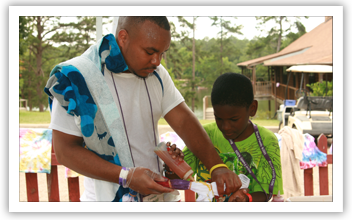 The counselor finally had to pull him aside. Marcus was not going to make it at camp for very long with that kind of behavior. The counselor offered him a $5 portable fan that he was fascinated with. However, to keep the fan, he had to follow certain conditions like staying with him and doing what he was told. He finished this discussion with “You are a great kid and I want to have a good time at camp with you”.

In this boy’s world, I do not believe the words “You are a great kid” are said often. I would assume with as many walls as he has surrounded himself with for physical and emotional protection, he hears more negative words and threats than anything else. The offer from his counselor appealed to him but I am not sure if it was the fan as much as having someone say he was great kid.

The rest of the week went amazingly well compared to the start. Marcus always stayed with his counselor and complied with the rules of the camp. His counselor/camper group went on a hike the second day and as they walked, they decided to talk about good things that they had done. Several boys talked about sports accolades and other things they had done. Marcus stated his good thing was “Being at camp with my counselor”. 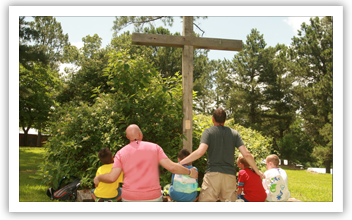 Dean was an eight year old new camper. His counselor believed he was just recently placed in the foster care system. He has had a great time at camp. He received his Bible on the first night. The bible teacher referenced it in her lesson the first day. Dean asked his counselor if he could bring it to chapel. Of course, the counselor agreed. He showed the Bible teacher that he had brought his own. She was very excited and showed him in his own Bible where he could find what she was going to teach that day. RFKC has given him a week full of fun but it has also opened his eyes to something greater that he can hold onto in this new world he has entered.