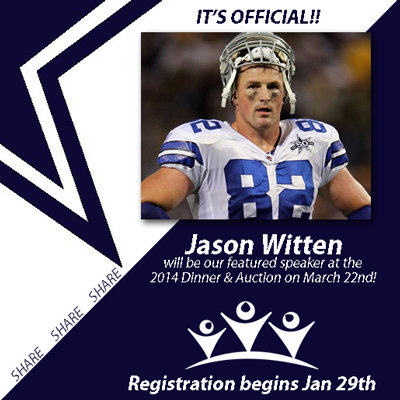 What a fun Friday announcement! We are excited to announce that Jason Witten will be our featured speaker at the 2014 Dinner & Auction to be held on March 22nd. Registration will begin on Wednesday, January 29th so mark your calendars now! We expect this event to sell out and seating will be limited so make plans to attend.

Jason and his wife Michelle, who is an emergency room nurse at Parkland Hospital in Dallas, started Jason Witten’s SCORE Foundation in 2007, and it has rapidly become one of the largest and most impactful foundations among NFL players. His foundation’s work against domestic violence and to help promote education in Texas and Tennessee has afforded Jason honors off the field. Most recently, Jason was named the 2012 Walter Payton Man of the Year. Jason and his foundation launched the Jason Witten SCOREkeepers program, which places positive male mentors on staff at six different family abuse shelters across Texas, in 2008. The foundation also opened Jason Witten Learning Centers at Boys & Girls Clubs centers in East Dallas and his hometown of Elizabethton, Tenn. Jason and Michelle also dedicated the Jason Witten Emergency Waiting Room at the brand new Niswonger Children’s Hospital in Johnson City, Tennessee, in 2008. In addition, the foundation also operates a youth wellness program called “Play.Move.SCORE” at Boys & Girls Clubs in Dallas and Fort Worth.

Start spreading the word with your friends, family, coaches and teachers as they will want to come here an inspiring message from Jason. This will be a great opportunity to share with them how Our Father’s Children impacts the lives of children through Royal Family Kids Camp, Onward & Upward and The Summit. Sponsorships are also available. If you or your company is interested in becoming a sponsor, please contact me directly.

We are all excited about having Jason here this year as we raise money to provide HOPE to children of abuse and neglect in North Texas. Come join us!  Click here to buy tickets.

p.s. Remember, we will begin registration on Wednesday, January 29th so be ready. We will send out an email and communicate through social media once everything is ready to go. Be sure to keep up with us on Facebook, Twitter and Instagram.