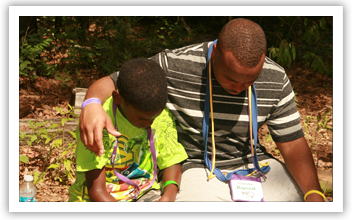 When we step out in obedience, putting our heart and energy into the Lord’s work, we hope to see the results of our partnership with Him.

At Royal Family Kids’ Camp, it’s hard to know when we’ll see a breakthrough moment with the children God sends us. It could be the very first day of our time together, or it could be when we all reach heaven as our Father graciously reveals all things. Below is the first of a 2-part series on these breakthrough moments.

Jay appeared to be shut down. His first hour or two with Counselor Tony could be described as awkward at best. The seven-year-old refused to look at his new adult companion, and wouldn’t converse in any way. As a new counselor, Tony was concerned. He was assured by more experienced friends that a break-through would occur, just to be patient and positive.

Sure enough, the two bonded while zip-lining and horsing around in the pond. Things were slowly turning around. Campus-wide game time sealed the deal. Jay was comfortably chatting about a large array of subjects, when suddenly the two happened upon a grasshopper. Jay wanted to know, “Who made that grasshopper?” “Well, God did,” Tony answered. Curious for more, Jay asked, “Who’s God?” “He created everything, and He loves you very much,” explained Tony.

After chapel this new seeker spent almost thirty minutes going through a book about Jesus with his new friend, Tony. Ending with Jesus’ death and resurrection, and a discussion of heaven, it was finally time for prayer and sleep. This just proves that the Lord goes before us. Is there any doubt that He paired these two for the week? Any doubt that both lives are changed already?

“For I know the plans I have for you,” declares the LORD, “plans to prosper you and not to harm you, plans to give you hope and a future.” Jeremiah 29:11