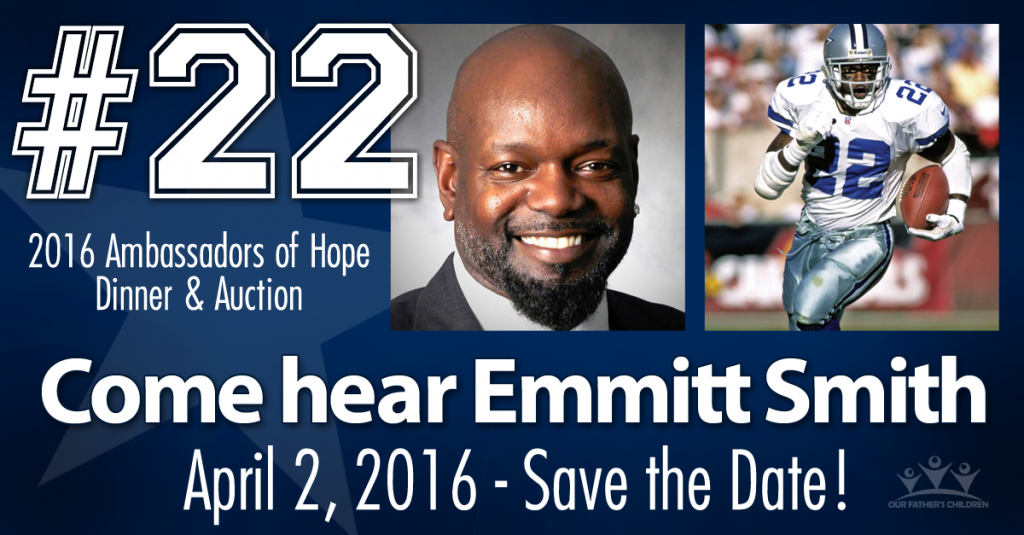 Our Father’s Children is excited to announce our featured guest speaker for the 2016 Ambassadors of Hope Dinner & Auction. Emmitt Smith, Pro Football Hall of Famer and former running back for the Dallas Cowboys, will be speaking at our annual fundraising dinner and auction.

Currently, Emmitt is the Chief Executive Officer of Emmitt Smith Enterprises, Inc. Prior to becoming a successful entrepreneur, Emmitt enjoyed a distinguished professional football career in the NFL for fifteen years. During those years, Emmitt attained several awards and accolades including three Super Bowl championships, an NFL MVP and a Super Bowl MVP and finished his career as the NFL’s All Time leading rusher. His professional career culminated with him being inducted in the NFL Hall of Fame in 2010.

Emmitt is now aggressively translating his champion’s legacy to the business community. With companies focused on real estate development, investment and construction, he is actively expanding his business scope. As well known for his character and integrity as he is for his athletic ability, He continues to give back to the community and support higher education via Pat & Emmitt Smith Charities (PESC), an organization that annually awards college scholarships and provides enrichment opportunities to underserved youth. Focusing primarily in North Texas, PESC’s TEAM 22 program partners with established organizations to provide a multi-year curriculum for underserved students, accessing and funding opportunities such as a summer camp, tutoring and leadership training.  In addition, PESC funds existing children’s programs in North Texas through is annual grant application process.

We are extremely excited to have Emmitt as our featured guest speaker. Beyond his accomplishments on the field, Emmitt has proven his commitment to success through his business and his charity and the support he has for underserved children. We are honored he has agreed to speak to our group in April 2016 and we look forward to his inspirational message. 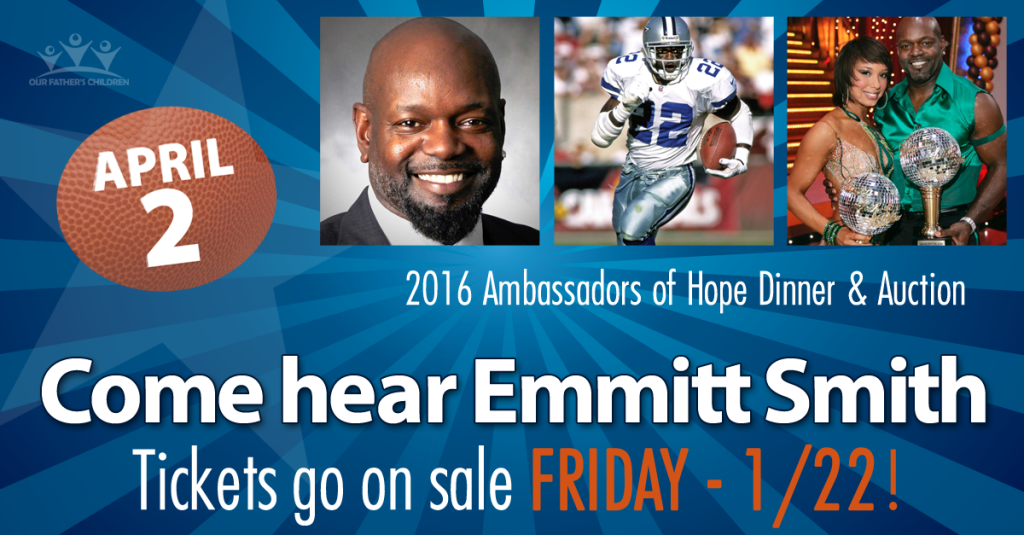 The 2016 Ambassadors of Hope Dinner & Auction will be held on April 2, 2016. The fundraising event will be located at the Hurst Conference Center in Hurst, Texas. Sponsorships are available for this event. Interested sponsors are encouraged to complete the form below or contact me directly at 817.788.2360. Funds from the event will be used for upcoming camps, retreats and mentoring programs for children of abuse and neglect in North Texas.