OFC participates for the first time in the North Texas Giving Day on September 17, 2015

TELL US WHO IS YOUR HERO OF HOPE 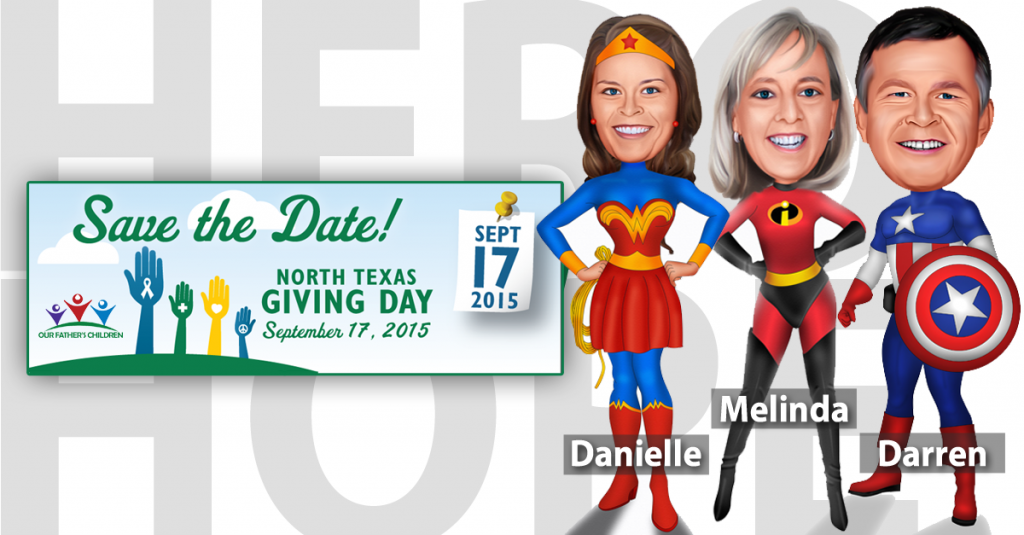 Are you a Superhero? Watching TV shows or the movies, you may have a picture of what a superhero is to be exact. Equipped with special powers. Able to leap tall buildings or fight of the bad guys with mighty force. Is that the type of hero you are thinking of? If so, let’s re-think that.

We would like to redefine a “Superhero” this way — “Ordinary people doing extraordinary service by providing hope to children of abuse and neglect in North Texas.” To us, that’s what a true superhero is. They may be a volunteer at one of our summer camps for kids ages 6-11. They may be a counselor at one of our weekend retreats for teens ages 12-15. Maybe they are a mentor to a young boy or girl with a history of going from foster home to foster home.

WATCH THE VIDEO BELOW:

Over the next few weeks, we will promoting our “Hero of Hope” Campaign to introduce you to volunteers who have been a “hero” to these children of abuse and neglect and have provided them hope by loving on them, giving them a hug, playing a game with them, going to the movies or just by being a good listener. 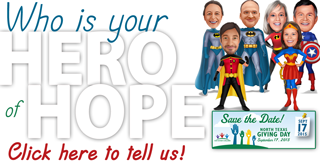 We are encouraging you to SAVE THE DATE of September 17, 2015. On that day, we are asking for your financial support on North Texas Giving Day. Through our participation in #NTXGivingDay, we will eligible not only for additional bonus offerings but we have also obtained a matching gift sponsor so your donation on that day will go even farther to provide hope to these kids.

Stay tuned to our Facebook page, Twitter and Instagram accounts or sign up for our emails to be kept informed of all of the activities surrounding our participation in the 2015 North Texas Giving Day.

Will you be a Hero of Hope on September 17th?  Join us.