Our July Royal Family Kid’s Camp was another new beginning for many of the 127 volunteers and 124 campers and our 2nd full camp at Camp Akiva in East Texas. New beginnings always bring great stories and here are a couple. 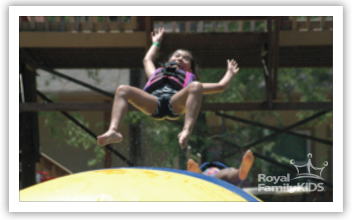 Uncle Ken, who is new to RFKC this year, said his greatest impression about camp this week is the change he sees in the campers who sit at his table during mealtime. Monday, when the children first arrive, they’re quiet with eyes downcast. By Thursday, it’s like they’re different kids. Their personalities are in full bloom, as if a switch has turned on. “Imagine what they might be like with a second week of camp,” Ken proposed.
This is the purpose of the Mentoring Club. We take what progress is made during the week at camp, and build on it throughout the year. Imagine the impact that could by made in these children’s lives by spending time with an RFKC volunteer during the school year.
So how does this club work? One mentor, a volunteer from RFKC, is matched with one camper. The two of them meet for at least four hours every month from September through May. Each month they attend a gathering of all mentors and children where they sing, have a Bible lesson, play games, make crafts, and eat snacks.

Camper Nick is a great example of what a difference this program can make in the life of a child. Two years ago he and Becky, one of our volunteers, were put together. Because of events in his young life, Nick was terrified of police officers. Every time he happened to see an officer in uniform, he ran in the opposite direction. As it happens, Becky is a police officer. She and Nick have developed such a bond, he is no longer afraid of that uniform. In fact, the moment he learned he’d be awarded an A Honor Roll prize in his school program, Nick invited Becky to attend – “Oh, and please wear your police uniform!” 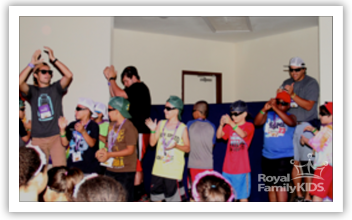 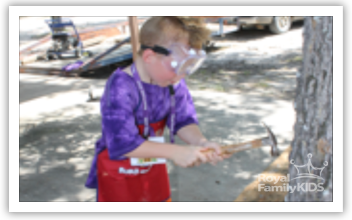 The impact God can have on these children through us is immeasurable. “Now to Him who is able to do immeasurably more than all we ask or imagine, according to His power that is at work within us, to Him be glory in the church and in Christ Jesus through all generations, for ever and ever.” Ephesians 3:20-21

Superheroes – some of us love these characters with powers to fly, freeze, climb walls, and catch bad guys. Some, however, tend to like the unexceptional guys who don’t have any phenomenal powers. They may rely on cool, out-of-this world gadgets, but for the most part, they’re just like us. We cheer for a run-of-the-mill man or woman who feels compelled to make the world a better place.
These normal individuals-turned-protectors remind us of the folks who volunteer at Royal Family Kids’ Camp every year. Our workers want to make a difference in the lives of children who’ve suffered abuse or neglect. Every one of them are ordinary – no capes, no abilities to fly, no x-ray vision. Yet, the moment they say “yes” to the call and step out in faith, they’re supplied with everything they need to accomplish their various assignments at camp. Saturated with God’s Spirit, they’re able to give beyond their normal ability, perform above their natural talents, and love and serve even when there’s nothing left in the tank.

Our wish is that more people would participate in this rewarding ministry. It’s humbling to experience God’s favor as we join in His Kingdom work. By His strength, He makes us what we aren’t. It’s absolutely true that God doesn’t call the equipped, He equips the called.

To learn more about volunteering for future camps or our weekend retreats or mentoring program, click here.