Devotionals are a big part of camp 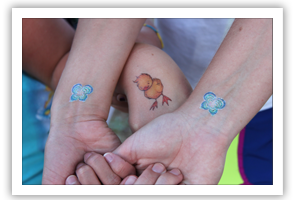 So much of the camp experience is just spending time with a counselor or staff volunteer and sharing stories and events of life. This is demonstrated with the following stories from camp.

We are finding out that there are nightly devos going on all over the camp. Counselor’s Kaitlyn and Cayley have a short devo planned each night for their 9-year-old campers. But it is the unplanned questions that bring up deep spiritual issues.

This particular night they were talking about the memory verse and how nothing can separate us from God’s love. Kaitlyn and Cayley explained how God is pursuing each one of the girls. They thought that was a little creepy, so their counselors had to explain that it was a good thing. Then they told the girls it was a personal decision to love and follow God, your parents can’t do it for you.  The discussion continued and the counselors explained to the campers that as Christians they spend time everyday hanging out with Jesus. The girls wanted to know what that was like, so they told them how they read their Bibles, pray, and listen to Him, not like a voice you hear, but listening in their hearts.

The next day two of their campers told them separately that they had asked Jesus into their heart. Macie said that after she asked Him, she just lay there quietly and hung out with Jesus.

Six counselors and twelve campers together in one dorm room sounds like an environment for high drama, but this is not the case of the older girl campers at RFKC. As the day winds down with all clean and ready for bed, the environment becomes especially special. That’s when the daily devo begins. On Monday, as Counselor Lisa led the devo thoughts she explained to the girls that this group was not an accident. God had planned for each girl and woman to be at this camp in this group this week because nothing good is an accident.  As she continued, she told the girls that God could use even bad things as part of His plan. It is through our prayer life and time in His word that He helps us deal with the bad things. We don’t know God’s plan, so we don’t have to figure out how things are going to work.

Then Lisa told them about a devotional app on her phone called, Jesus Calling, that she uses each day to read verses to hear God speak to her. She opened the app for the first time that day to read the devo for Monday, and they were all amazed and surprised to hear the title for the day, “THE PERFECT PLAN”.